The heavy-duty pickup trucks from Ford are branded as Super Duty models, and that includes the F-350. The Super Duty redesigns have been alternated with the F-150 for generations already, so it makes sense to expect the 2024 Ford Super Duty F-350 to share a few essential features with the F-150. The Super Duty line earned a mid-cycle refresh in 2020 and is currently in its 4th generation which debuted back in 2017. Considering that the Super Duty is introduced with a new generation every 5 to 6 years, a 2024 model year can serve a redesign.

The 2024 Ford Super Duty F-350 is most likely to preserve the current engine lineup that offers 6.2L gasoline and 6.7L V8 diesel option. What’s more important is the possibility of a hybrid model arrival.

A hybrid drivetrain is already offered by the most recent F-150 generation, so it makes sense that a lot of enthusiasts anticipate some sort of hybrid technology from the upcoming Super Duty. A tested prototype spotted to wear a distinctive new tailpipe that indicates a potential new drivetrain alternative.

However, it is unlikely that the 3.5L turbocharged Powerboost hybrid that powers the F-150 will support the Super Duty models as well. This is because the mentioned engine wouldn’t be able to offer enough power for the heavy-duty trucks, not to mention that it would need a different frame and smaller transmission.

That being said, heavy-duty truck consumers are leaning to favor onboard power. A hybrid version of the 2024 Ford Super Duty F-350 could be a revolutionary step, regardless if it combines the electric motor with the gasoline or diesel powertrains. This sort of truck would require a massive battery pack, probably with similar capability to a job-site inverter generator that can generate 110 to 220V power.

Possible Redesign and Feature According to Spy Photos

According to the spy photos of the upcoming Super Duty trucks, they will come with an upgraded grille and front fascia, along with transformed taillights and rear bumpers. They will most likely to retain the bed sheet metal and door without any significant changes. That being said, at this point, not much is known about the 2024 Ford Super Duty F-350 and its siblings, considering that the test trucks are covered in heavy camouflage. The spied F-350 XL prototype which remains to sport the luminous headlight bulbs, but an LED upgrade might be on the way.

Moving to the interior department, the upcoming Super Duty potentially mimics the latest F-150 generation with similarly new steering wheel. It’s most likely to preserve the current shifter. The entry-level models are expected to receive analog gauge but a digital display for the driver.

A couple of years ago, two Super Duty trucks are spotted by a source to complete a testing with autonomous driving hardware, which includes a load of sensors and cameras on the front and rear ends of the vehicles, along with the roof. This suggests a hands-free driving feature for the upcoming F-250 and F-350. 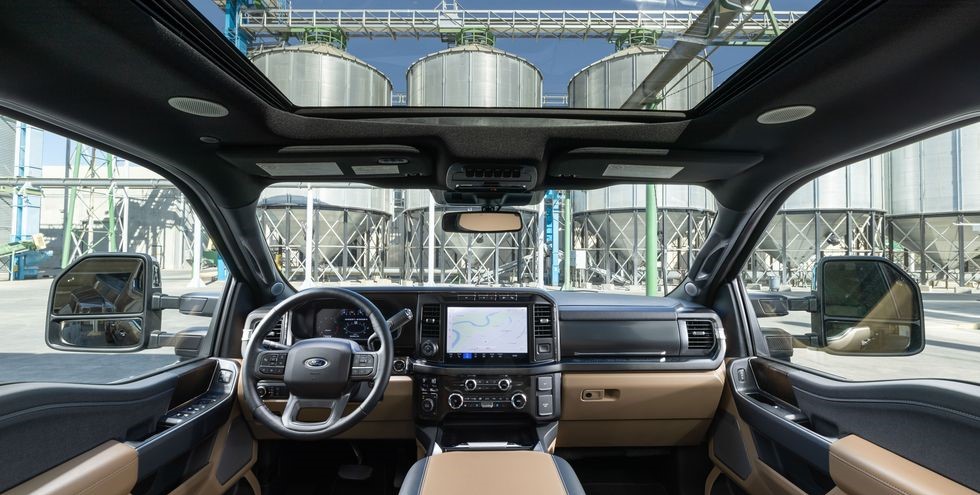 The Ford’s BlueCruise technology that offers hand-free driving function already makes appearance in the latest model year of the F-150. It allows the truck to remain on the centered lane and based on adaptive cruise control. It is yet to be confirmed whether the 2024 Ford Super Duty F-350 will offer this feature, but at least, it is already known that the technology has been tested on the model.

No official announcement is out yet regarding the 2024 Ford Super Duty F-350 release date or pricing. However, if it follows the release schedule of the previous model year, it should be available by summer 2023. Estimating the price is quite impossible at this point, but for a reference, the 2023 model year is available at a starting price of $36,500.